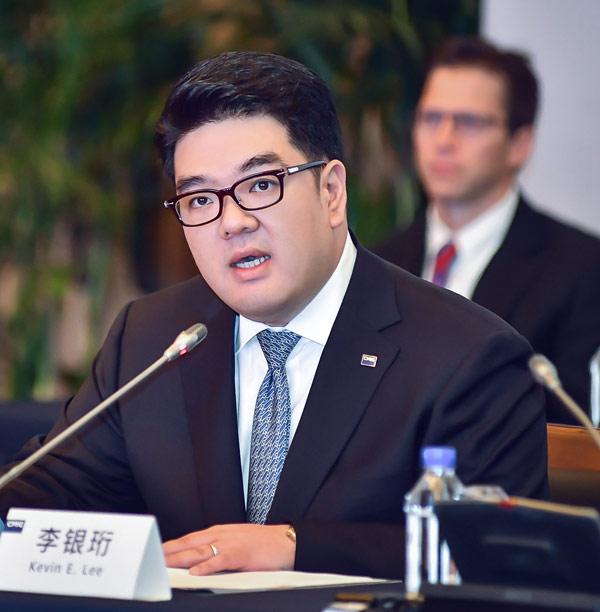 In May 2014, 59 leading private Chinese companies formed China Minsheng Investment Group or CMIG with 50 billion yuan ($8billion) in registered capital. Today, CMIG boasts assets of 260 billion yuan, up over fivefold from the time of its formation.

Yet CMIG believes there are many more investment peaks to scale before it could feel cotented. Assets are expected to further increase to over 1 trillion yuan in five years.

"When you are trying to climb Mount Everest, there are Sherpas who help climbers by carrying their heavy luggage. I consider myself as a corporate Sherpa, offering my assistance to CMIG, helping it to become a leading investment institution of the world."

According to Lee, the current global situation favors CMIG. To illustrate the point, Lee refers to the latest World Economic Forum in Davos, held in January.

Lee attended the WEF many times in the past. But still, the latest edition was a new experience.

"It's the first time that I've seen so many Chinese elements. As a Chinese company, we were approached by many foreign organizations at the meeting."

According to Lee, participants acknowledged the increasing global leadership of Chinese companies. President Xi Jinping in his widely acclaimed keynote speech at Davos said that China aims to promote open and free trade, and warned against protectionism.

CMIG would endeavor to work to realize Xi's vision, Lee said. His career record suggests Lee is experienced enough to drive CMIG in that direction.

In his previous job as the chief global strategy officer at Hana Financial Group, one of South Korea's largest financial institutions, Lee supervised 128 networks in 24 countries.

Lee left the successful South Korean company to join CMIG when it didn't even have an office.

For, he could not resist the "excitement of being in such a unique company. CMIG has a scattered equity structure with no dominating shareholders, and this cannot be found anywhere else in the world."

CMIG's human resources come from all backgrounds and from all over the world. More than 50 percent of CMIG's employees are foreigners or have overseas work experience. In Lee's words, CMIG is truly a platform for "global citizens".

In April 2016, CMIG International, under Lee's supervision, finalized the largest deal since its parent's formation. The acquisition of Sirius International Insurance Group Ltd for $2.6 billion was a vital step as CMIG aligned itself with China's larger goals as per the Belt and Road Initiative.

That is part of CMIG's core strategy. So, it is leading dozens of Chinese private enterprises into investing billions of dollars in countries like Indonesia and Cambodia, to promote local prosperity. It also actively carries out exchange programs between China and these countries.

Also, CMIG and CMIG International will endeavor to help Sirius to expand into the Asian market and further build up its strength. CMIG has retained every single employee at Sirius. "It's a win-win," said Lee.

"Historically, the Silk Road is a two-way trade route connecting Asia, Africa and Europe," said Lee. "Today, the Belt and Road Initiative is not only about capital investment, but a two-way development channel for countries along the line. That is the real spirit of Silk Road.

"In the future, we will continue to carry out the 'going global' strategy, concentrating on nations alongside the Belt and Road. Meanwhile, we will also actively promote 'bringing in'."

The three financial groups are: a global insurance group in Singapore, a financial leasing group in Hong Kong, and an asset management group in London, Beijing and East China. The three industrial forays are: home-based elderly care, new energy sector and standardized housing on an industrial scale.

"We've selected these sectors because they are technology-intensive, in line with the national strategy, and bear huge growth potential. More importantly, they can help enhance the livelihood of ordinary people," said Lee. "After all, people's livelihood (Minsheng) is in our name."